The Book of Why

Summary: How causality gives us tools to understand the question of cause-and-effect and confounders

J. Pearl and D. Mackenzie, The book of why: the new science of cause and effect, First edition. New York: Basic Books, 2018.

This book shows that data is stupid. Data can record events but cannot answer why any of the events are the way they are.

Causal inference posits the brain as the most advanced tool for understanding cause and effect.

Counterfactual: When scientific inquiry involves retrospective reflection. “Why?” is a counterfactual question.

Probabilities encode our beliefs about a static world. Causality explains probabilities in a changing world.

The inference engine assumes perfect and unlimited data for the given figure: 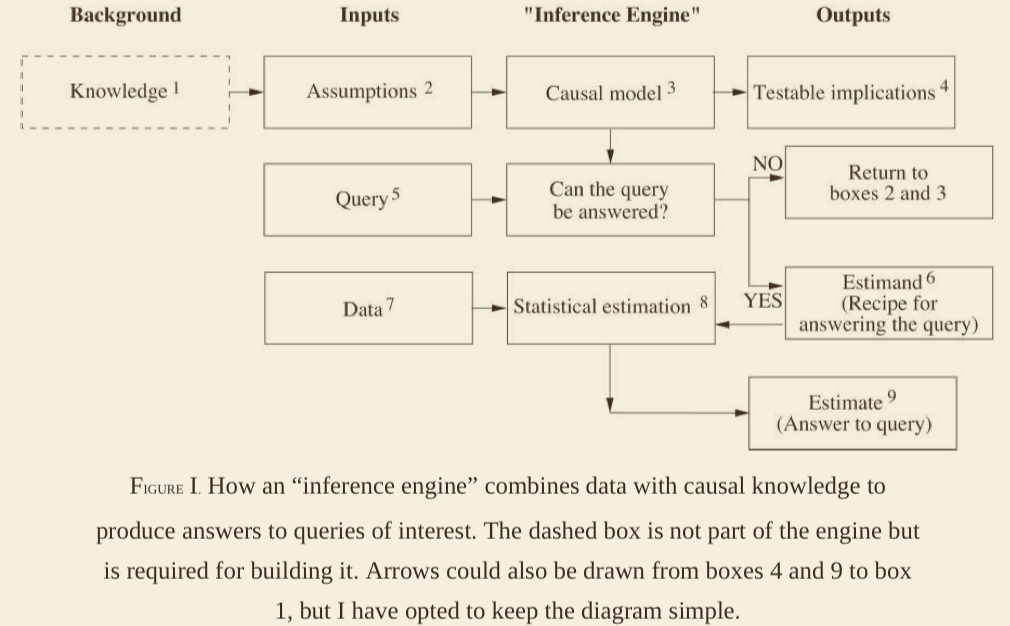 Estimand: generalized mathematical formula to answer data questions. A statistical quantity estimated from data that can represent an answer to a query.

A given estimand is computed on the basis of the causal model alone, prior to an examination of the specifics of the data. This gives the inference engine better adaptibility.

Binary Evaluation of Query: determines if a query can be answered under an existing causal model.

Knowledge: experience from the past such as prior observations and education.

Queries: the scientific questions to be answered.

Testable Implications: observable patterns or dependencies resulting from the listening pattern of a causal model.

First rung: observation. This concerns recognition of patterns. This rung asks, “What if I see …?”

The second rung: Doing. Altering an environment to achieve a certain goal. This rung poses the questions of “What if we do…?” or “How?”

Mini-Turing Test: Encode a simple story on a machine and see if it can answer causal questions a human can answer.

Bayesian inference enables one to express personal experiences mathematically and combine it with data in a principled and transparent way.

“Causation” via a causal diagram is straightforward. A variable X is a cause of Y if Y listens to X. Y’s value is determined by what it hears.

B is the mediator which relays the effect of A to C. B filters information about A from C.

B is a confounder of A and C. B makes A and C statistically correlated despite no direct link between them.

Conditioning on B will make A and C dependent

“When you prohibit speech, you prohibit thought and stifle principles, methods, and tools.” Some angst about how causality is not permitted discussion in commons stats classes

“You are smarter than your data. Data does not understand causes and effects; humans do.” I like this thought a lot as the common notion is to “let the data guide you.” However this has led to many many problems in the world ranging from racial biases to incorrect inferences.

All deep learning can do is match some function to data. QUESTION: I wonder how true this is?

“[To] understand causation, we have to teach a [computer] how to break the rules” THOUGHTS: Fun “revolutionary” quote on what causation means for the day to day scientist.